Topic of the month

Use of an already-finished wheel core /© voxeljet AG

This technology has already opened up a new possibility for the foundry industry, namely the fast and economic production of complex castings. Classic production processes show weaknesses or are reaching their limits. With 3D printing technology, whether for prototypes, individual parts or small series, seemingly impossible geometries can be produced quickly, precisely and cost-effectively.Speed and free design possibilities are the key features of this technology. In addition, the use of large-format 3D printing systems and a wide range of materials for many sectors opens up more and more new possibilities for use. In the meantime, the technology is being used in the automobile industry for engineering, the pump industry and aviation. A new materials system using phenolic resin based binders offers advantages in terms of strength, recyclability, reduced gas consumption and environmental friendliness. 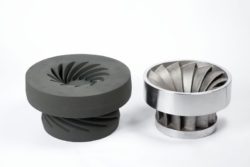 A material system that has already been tried and tested for a wide range of alloys and with years of experience offers a printing process that uses a cold-curing furan resin as a binder (Organic Direct Binding - or ODB for short) for bonding the quartz sand layers together. However, this process which can only be attached via core markings in the production of delicate cores in particular, thereby tends to reach its limits. Poor casting surfaces, e.g. through mineralisation, is a good reason for alternative special sands. Here, for example, kerphalite and cerabeads sands, some of which can be further mixed with additives, offer solutions, but are significantly more expensive than quartz sand.

A newly-developed sand process, which is an alternative to the ODB process, is the so-called Phenol-Direct-Binding method, PDB process for short. Like for the ODB process, a thin layer of sand is initially applied. After the layered application of the sand, the phenol-based binding material is applied to the sand using a print head. The final stage in the process involves placing an infrared lamp over the construction field to heat up the sand and thus cure the binding material. The building platform is reduced to a lamination strength. Subsequently, the coating is followed by a new layer of particulate material subject to simultaneous heating. The process is then continued until the moulded part is printed in full.


In direct comparison, the new PDB process has many advantages over the conventional ODB process.

“Long and thin cores are becoming more and more demanding, which is why our foundries are increasingly reaching their limits, despite their design freedom in furan resin-based 3D printing. In a particular case concerning a cylinder head spout, the water jacket core repeatedly broke because the strength in the printing process did not withstand the pressure of the molten metal. An “upright” casting, in order to exert a low bending moment on the core, requires no improvement. Depending on the customer's requirements, the binder content and the annealing loss can be flexibly adapted, which ultimately results in the desired outcome for the core mentioned, printed in PDB, with a bending strength of 390 N/cm²” according to Alexander Kudernatsch, Vice President of Services at voxeljet.

In addition, the new PDB process is more environmentally friendly since the excess sand is nearly 100% recycled and can be reused and the binding material offers reduced pollutant content.

Kudernatsch: “In addition to the current use of quartz sand, we see further potential in the use of special sands in the future. Since we work with a thermosetting resin, we can print with different particle materials in the PDB process. In addition, qualified raw material is processed in a raw state, saving additional process materials and hardware such as activators and mixing equipment. After qualification of the sand, machine customers can also obtain it directly on site which reduces the logistics costs and expenses significantly”.

Based on the great demand and emerging machine delivery, there is currently only internal limited capacity for customer PDB orders (available dimensions 1000 x 600 x 500mm). “Nonetheless, we print test parts for our customers to provide an overview of the casting behaviour of the phenol parts,” says Kudernatsch. The plan for 2017 is to further advance PDB machine capacity to meet increasing demand.

voxeljet AG, which is based in Friedberg (Bayern) near Augsburg (Germany), is a manufacturer of industrial 3D printing systems. The company has been listed on the New York Stock Exchange since its IPO in the year 2013. Besides the development and distribution of printing systems, voxeljet AG also operates service centers for the on-demand manufacture of molds and models for metal casting in Germany and abroad. These products are manufactured with the help of a generative production method based on 3D CAD data (also referred to as "3D printing").