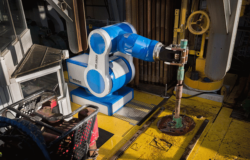 Nabtesco, world market leader for precision cycloidal gears, received the off-shore certification for use of the cycloidal gears installed in the drill floor robot DFR-1500 from the robot manufacturer RDS on the Deepsea Atlantic oil platform. The certification was issued by the international classification society DNV GL.

The gears in the drilling platform robot DFR-1500 from RDS also had to be tested thoroughly by the DNV GL. Nabtesco passed the extensive practical and theoretical tests with flying colours in order to successfully complete the rigorous certification process. The DNV GL certification confirms compliance with the most stringent standards with respect to quality, safety and reliability and therefore ensures maximum operational safety for users on the high seas.

The current type-approval certification is a one-time certification that applies to the use of the DFR-1500 on the Deepsea Atlantic oil platform. Operation of the robots on other platforms requires an additional certification by the DNV GL. An application is currently being planned. Generally, these certifications must be renewed every four years.

Daniel Obladen, Head of Sales General Industries at Nabtesco: "The DNV GL certification is an important step for us. The oil and gas industry is still rather conservative in its views, but that could change soon. Working on oil platforms is extremely hard manual labour and very dangerous. Robots will be used more often in the future to protect employees, as in Norway, for example. The laws there are very stringent, so that the assignment of human beings in hazardous areas is being minimised. Of course, that intentionally also increases the pressure on industry. Currently we are examining further potential off-shore applications, for example the use of valve adjusters and robots that operate underwater."