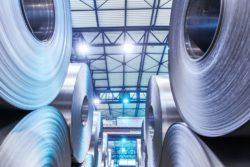 Notwithstanding the correction of 3rd quarter and current fiscal year figures of Industrial Solutions and hence of group forecast for thyssenkrupp (see press release of July 31), the technology and industrial group remains on its growth path.

Despite adverse currency effects, the Group[1] was able to increase its order intake and sales in the 3rd quarter of the 2017/2018 fiscal year by 7% respectively compared with the prior-year quarter. On a comparable basis, meaning adjusted for currency and portfolio effects, the order intake improved by 10% and sales by 9%. The Group’s adjusted EBIT of €332 million in the 3rd quarter was, however, below the prior-year figure. As already communicated at the end of July, this is mainly due to additional project expenses of around €200 million in the Industrial Solutions Business Area.

thyssenkrupp delivered positive progress across many areas in the first 9 months of the current fiscal year: The Group’s order intake of €31.1 billion was at about the same level as in the prior year (€31.4 billion); adjusted for currency effects, the order intake increased by 2%. thyssenkrupp’s sales went up from October to June by 3% to €31.7 billion; on a comparable basis, the increase was 6%. Group adjusted EBIT rose in the same period to €1.3 billion (prior year: €1.2 billion).

The materials businesses benefited in particular from the sustained positive trend in the market cycle, leading to strong earnings contributions from both Materials Services and Steel Europe. In the industrial goods businesses, Components Technology and Elevator Technology continued to improve in the first 9 months despite the difficult market environment. Due solely to adverse currency effects and higher material costs, operating earnings in both Business Areas are temporarily slightly down compared to the prior year. At Industrial Solutions, however, adjusted EBIT declined in the first 9 months to € 224 million (prior year: €70 million) due to the additional project expenditures previously communicated.

Free cash flow before M&A improved significantly in the first 9 months compared with the prior year due to a decrease in working capital in our materials businesses. As expected, however, it remained in negative figures at €-1.6 billion. The main reasons for this, as reported, are the lower order intake and large expenditures from the order backlog at Industrial Solutions.

“We see a mixed picture. The bottom line is, that we are not satisfied with the current results”, said Guido Kerkhoff, Chairman of the Executive Board of thyssenkrupp AG. “There’s no point in sugar-coating it. Notably the cash flow is unsatisfactory, and that is not a situation which can be sustained long term. We have to improve significantly across all our businesses. And that is what we are now working hard to deliver.”

The joint venture of our European steel activities with Tata Steel will significantly improve thyssenkrupp’s balance sheet on completion of the transaction. The equity ratio, for example, will increase from around 10% to over 15%, while pension liabilities will decrease by about 50% to approximately €4 billion. As expected, however, the agreement signed in June will lead in the short term to a one-time increase in tax expenses, as it will no longer be possible to recognize loss carry forwards in Germany. As a result of this one-time effect, net incomefor the first nine 9 decreased slightly to €230 million (prior year: €326 million).

The joint venture also has an impact on thyssenkrupp’s reporting structure. From now on, the Steel Europe Business Area will be defined on the balance sheet as a discontinued operation.

In the current fiscal year, thyssenkrupp expects consolidated adjusted EBIT of around €1.8 billion (prior year: €1.722 billion), which is at the lower end of the original guidance range of €1.8 billion to €2.0 billion. Free cash flow before M&A will continue to show a significant year-on-year improvement (prior year: €-855 million), but will be negative due to the lower contribution from Industrial Solutions. Despite these developments, the Group’s net income will continue to be significantly better than in the prior year (€271 million).

Improving performance has priority in all Business Areas. By fiscal year 2020/2021, the Group targets free cash flow before M&A of at least €1 billion. To create transparency on the potential in each business, thyssenkrupp is announcing medium-term targets for the Business Areas and the Group for the first time with a specific time horizon. Also for the first time, thyssenkrupp is publishing cash flow targets at Business Area level. The KPI used for this purpose is cash conversion, which is the ratio of adjusted EBIT to the actual cash inflow in each Business Area.