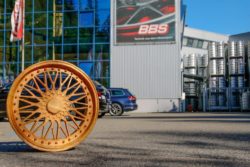 This 1:1 replica of the famous original can be seen in Schiltach and at selected shows


Distinguished by its cross spoke design the RS is the archetypal BBS alloy wheel design recognised by connoisseurs and loved by generations of fans the world over. By combining its classic multi-spoke look with advanced technology BBS further developed this wheel to create a two-piece forged variant called the “Super RS”.

Who says a wheel always has to be made from metal? Certainly not Anna Tamara Schmid, who crowned her wood sculptor apprenticeship by creating a 1: 1 model of this famous BBS wheel from fine cherry wood. This magnificent wooden replica wheel can now be admired at the BBS HQ in Schiltach as well as at selected trade fairs and events.

Anna Tamara Schmid comes from Freyung in Lower Bavaria, and completed her education at the state vocational school for wood sculptors in Oberammergau. The 19-year-old, who considers herself a “real diehard”, had the crazy yet brilliant idea of making a full-scale model of a BBS alloy wheel as her graduation project.

Her friend suggested that she make direct contact with BBS to request the loan of an actual wheel as her model. “Initially we were sceptical as well as curious about this unusual request, but the final result just left us speechless," says BBS marketing director Mario Schurr. 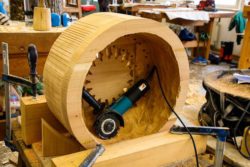 Much blood, sweat and tears went into the work, which began as three planks of wood that had to be sawed, cut and planed to create 15 individual components that were then glued together. “The project took a total of 100 hours (12 days),” says Anna Tamara Schmid. “It took 18 hours just to complete the preparatory work, and turning and gluing of the 34 bolts.”

Despite some setbacks that included woodchips in an eye, Anna Tamara Schmid persevered. Once she had finished the rim, the spokes were chiselled out. Next came the wheel star and centre cap for the wooden BBS Super RS. By the time the holes for the 34 bolts were drilled, the finish line was in sight. The spokes of the star were accurately contoured with fine files, and the finishing touch was a protective coat of antique wax.

Needless to say Anna Tamara Schmid graduated with flying colours, and BBS added its own tribute and appreciation to her fine effort. As Mario Schurr says, “A BBS wheel is no longer just cast or forged from metal with passion; it is also carved from wood with passion!”
www.bbs-international.com